15 Minutes of Writing Per Day Equals a Book 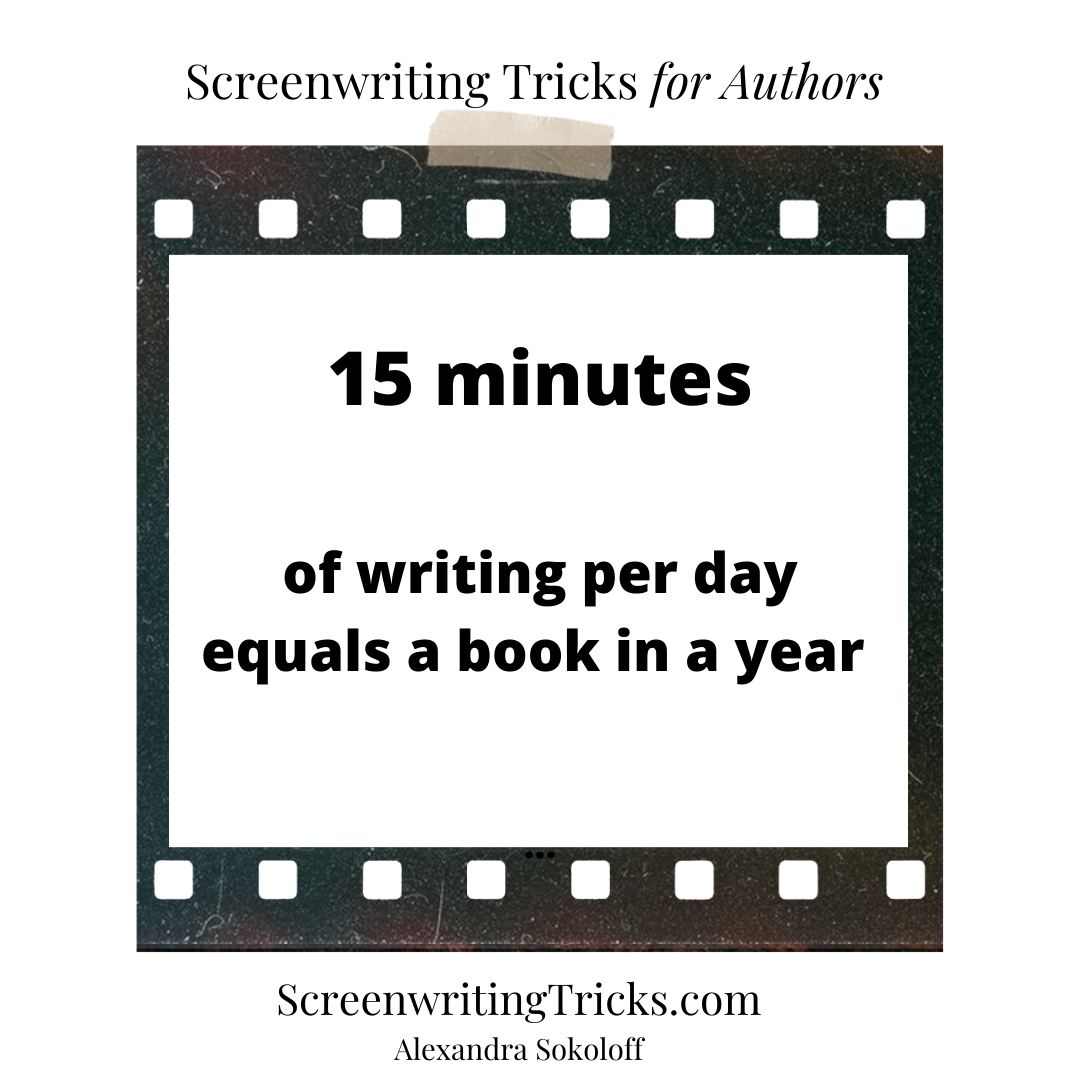 Happy New Year, everyone!! I’ll keep this brief, because I’ve come to believe in easing into the year instead of making frantic pages of resolutions, But how about just this one?

I’m going to write on my book or script for 15 minutes a day.

When I was teaching dance I would always quote my students a study on workouts that concluded a 15-minute workout basically delivers 80% of the results of a 1-hour workout.

Anyone can do fifteen minutes, right? For eighty percent of the results? So why the hell not work out? Where do I sign?

And I think that’s a really important concept to grasp for ANYTHING we want to do.

–       How about learning a language, or improving a language you already have a foundation in? 15 minutes a day. 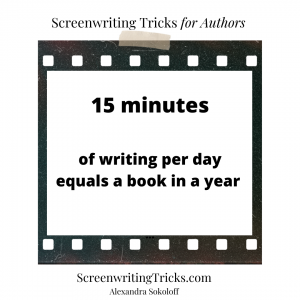 I don’t think it’s said often enough that you CAN write a novel (or a script, or a TV pilot….) in whatever time you have. Even if that’s only fifteen minutes a day. If you have kids, if you have the day job from hell, if you are clinically depressed, if there’s a pandemic, if democracy (or half of Congress) seems to be crumbling around you— whateveris going on in your life, if you have fifteen minutes a day, as long as you write EVERY DAY, to the best of your ability, you can write a novel that way.

Fifteen minutes of writing a day for a year equals a book.

In fact, I wrote my first novel, The Harrowing, by writing just five minutes per day.

My day job was screenwriting, at the time, and yes, it was a writing job, but it had turned into the day job from hell. But fury is a wonderful motivator and at the end of the day, every day, I was so pissed off at the producers I was working for that I would make myself write five minutes a day on the novel EVERY NIGHT, just out of spite.

Okay, the trick to this is—if you write five minutes a day, or fifteen, you will write more than five or fifteen minutes a day, sometimes a whole hell of a lot more per day most days. But it’s the first five minutes that are the hardest. Sometimes I was so tired that all I could manage was a sentence, but I would sit down at my desk and write that one sentence. Then some days I’d tell myself all I needed to write was a sentence—and I’d end up writing three pages.

It’s just like the first five minutes of exercise, something I learned a long time ago. As long as I can drag myself to a dance class (or to the living room) and endure that first five minutes of the workout, and I give myself permission to leave after five minutes if I want to, I will generally do the whole class, and usually end up loving it. (There are these wonderful things called endorphins, you see, and they kick in after a certain amount of exposure to pain…)

The trick to writing, and exercise, is—it’s STARTING that’s hard.

I have been writing professionally for . . . well, never mind how many years. But even after all those many years—every single day, I have to trick myself into writing. I will do anything—scrub toilets, clean the cat box, do my taxes, do my mother’s taxes—rather than sit down to write. It’s absurd. I mean, what’s so hard about writing, besides everything?

If even that seems too much right now, try committing each morning to a Non-Zero Day. This principle was legendarily posted some years ago on Reddit by “Ryan from Canada,” who described a Zero Dayas one in which you have done no action to advance toward your dream. So a Non-Zero Dayis one in which you take at least one small action toward your dream—whatever it is. If it’s getting close to bedtime, and you’re still at zero—do something. Anything. A bit of research. Make a list to do tomorrow. Keep a list of small writing tasks that you can refer to when you’re in danger of a zero day.

It’s such a catchy idea that it’s easy to implement.

Or better yet, write for five minutes, or fifteen, right now.

This week for paid subscribers: finishing off the full story breakdown of The Hunger Games, with Act III.

Subscribe for free to get these posts delivered to your inbox!