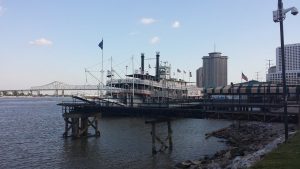 This is is the weekend we all would have been in New Orleans, at Bouchercon. It is unnerving, disorienting, and truly, truly heartbreaking—that the reality of Covid and Louisiana’s frightening infection rate forced the Bcon organizers to do the only responsible thing and cancel.

And don’t get me wrong. The travel would have been nightmarish, and on one level it’s a huge, secret relief that I can write this weekend rather than give in to the 24/7 rollercoaster that a great conference is.

I first went to New Orleans for research on a script I was writing, back in the good old days when studios gave screenwriters a research budget. It was a magical trip. Research travel always is, because when you do that focused kind of travel, everything and everyone you come across is useful for your story. That particular trip gave me material not just for that script—I’ve used New Orleans as a setting for one of my few paranormal thrillers, The Shifters—which was a complete joy to write, especially being able to live in New Orleans with those characters and explore all the things about the city that I love. I’ve used it in my new book, since so many early San Francisco pioneers came from or through New Orleans. 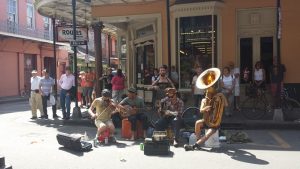 Of course, I’ve had much more time to explore the city, and beyond, since that first visit. One of the things I most regret about the cancellation of this year’s Bouchercon is that I was going to lead a walking tour of the French Quarter for readers. I was so looking forward to introducing people to the New Orleans I know and love.

NOLA is a double pleasure for me because it’s so entwined with so many great writing conferences. The Public 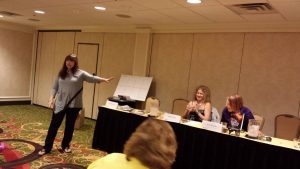 Library Association national conference, the first big convention to go back to New Orleans right after Katrina. Romantic Times, Romance Writers of America (one of those twice!), Writers for New Orleans three or four times, Pen to Press, the Jambalaya Jubilee, and of course the epic 2016 Bouchercon, Blood on the Bayou, where we took to the streets on floats and the second line drew hundreds of delighted locals and tourists. I’ve performed there (twice at the House of Blues!), I’ve taught there. It’s an especially romantic city for me and Craig (but what couple who’s ever been there doesn’t feel that?). And I can’t wait to take the boys there when they’re a little older.

But you know, it’s not just New Orleans. I am so incredibly lucky to have the experiences and memories of book conferences and festivals in so many different cities and countries. It’s always been one of my favorite parts of being an author—and one of the most important. The amount of business done at those conferences is astonishing. I’ve made book deals, I’ve been commissioned for short stories, I’ve been asked to give the Screenwriting Tricks for Authors workshop dozens of times after talking on a panel or just chatting at a lunch or at the bar.

And then there’s the inspiration.

I committed to the extremely daring leap of my new Golden Gate series at Bute Noir, in the audience listening to “Ambrose Parry” discuss their historical mystery series.

So the question all this leads me to is…

What are new authors doing for inspiration and networking and business deals now?

I know that new ways spring up. (After all, if you think about it—authors somehow managed to write books before laptops or even typewriters…). There are plenty of online communities. I know I’m still just as likely to pass a new author on to an agent if they’ve made an impression on me online.

But how can it possibly be the same as those magical, riotous live conferences?

And there’s another thing.

We haven’t actually acknowledged where the world is, and what it all means.

So I’d love to know:

Do you have a sense of what authors are doing for networking in these pandemic days?

How are you coping?

Do you have the same feeling that the book community will never be the same again?