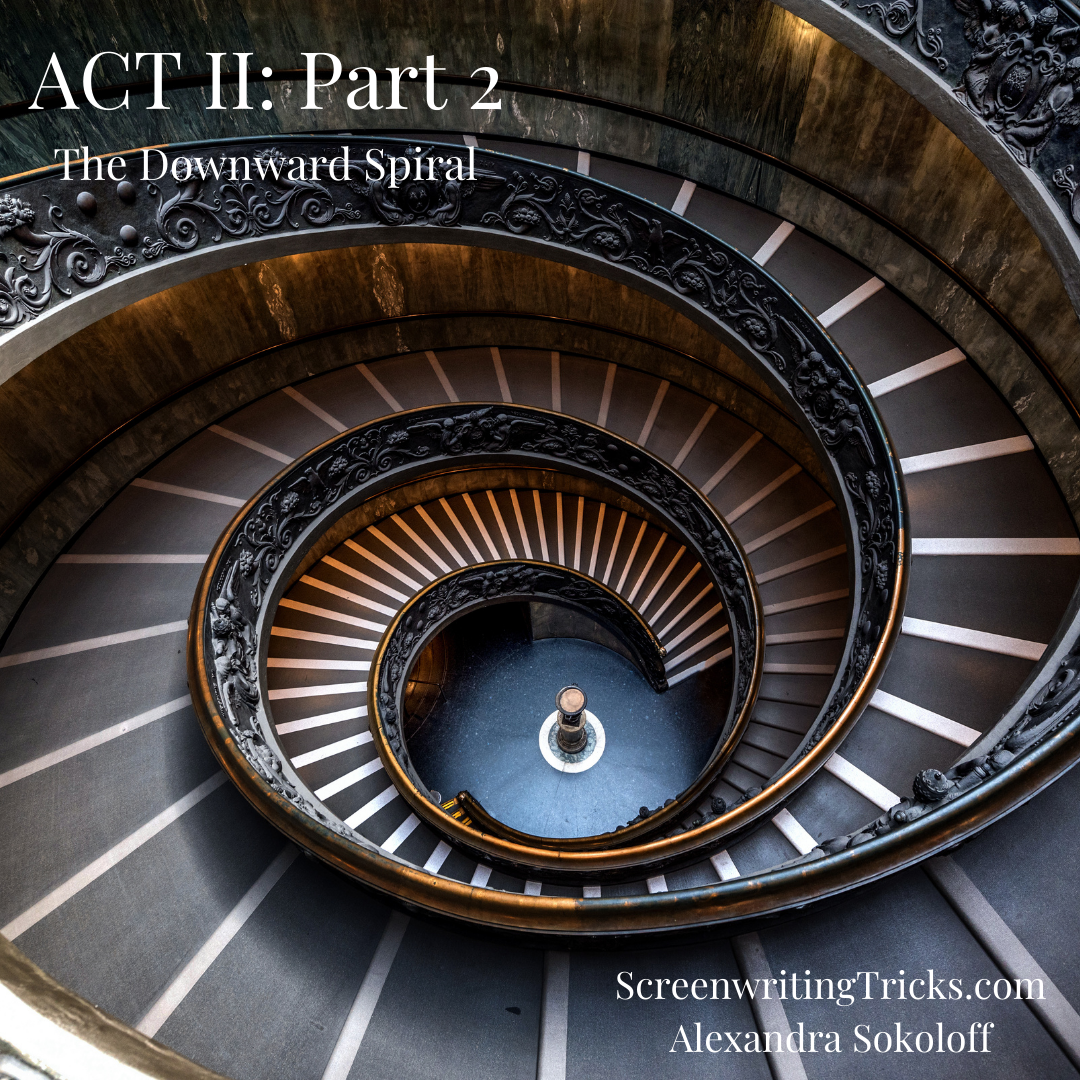 Nanowrimo Week 3: The Downward Spiral. If you are blazing through #Nanowrimo like a speeding train and are actually working on the third quarter of the story, you have reached what is very often the darkest quarter of your story. And often the muddiest! So let’s try to get some clarity.

To be very, very general— in Act II: Part 1, the main character is usually WINNING. There are some setbacks and battles, but they’re very likely racking up a bunch of victories as well. But after the game changer of the MIDPOINT, your protagonist will start to lose, and lose big.

Why is it so common that this quarter of the story gets so dark? I’ll say it flat out: it’s partly just emotional manipulation. A victory always bigger if it’s snatched from the jaws of defeat. Take your character(s) down to the depths of confusion and despair, and it is that much more exhilarating to see them get that sudden clarity and go for the big win. Manipulation is what we do as writers. It works!

But an important thing to keep in mind is that “dark” isn’t necessarily a bad thing. All of the bright, daylight actions of Act II:1 haven’t gotten your hero/ine what they truly want, right? So it’s time for them to go within, to find answers in their past, in their subconscious, in their own failings, in the wounds that have held them back.

Joseph Campbell, the great mythologist who inspired all of Hollywood (and now all of us!) to examine the mythic journey, says it best:

It is by going down into the abyss that we recover the treasures of life.

Here are some scenes we tend to see in Act II:2 that create that dynamic.

DESPERATE MEASURES
Because the actions your hero/ine has taken so far have not gotten them what they want, the NEW PLAN they make and the actions they now take toward their goal will become larger and increasingly obsessive. Small actions have not cut it, so it’s time for desperate measures.

We’ll see the protagonist making HARD CHOICES and CROSSING THE LINE: The hero/ine may actually start doing things that are against character, self-destructive, or downright immoral.

– In Silence of the Lambs, when Catherine is kidnapped, Clarice is warned by her FBI roommate and ally that if she doesn’t study for and take her FBI exams, she’ll be kicked out of the program. Of course Clarice puts Catherine’s well-being above her own; that’s why we love her—but the looming exams and threat of expulsion are a great way to back her into a corner and force hard choices.

– One of my favorite examples of the hero CROSSING THE LINE is in Raiders of the Lost Ark. At the Midpoint, Indy has just discovered the exact location of the Ark. Now in a huge TWIST, he discovers Marion is still alive, held prisoner by Belloq and the Nazis. Does he rescue her? No. That would jeopardize his chance to get the Ark. Instead, he re-gags her and leaves her tied up and at the Nazis’ mercy. Man, does this guy need some serious redemption…

– In a romance or comedy, we frequently see the protagonist start to tell lies (or tell bigger and bigger lies) to keep their relationship with the love interest.

– And we’ve seen it in about a million cop and detective thrillers: the cop is thrown off the case or suspended—but then breaks the law by continuing to investigate.

Often the hero/ine will lose support from allies when they begin to cross the line. This is the place that you see a friend or loved one lay into the hero/ine with a blistering monologue about how the hero/ine is doing everything wrong, or even walk out on the hero/ine, saying they can’t recognize them anymore. And of course keep in mind that this scene happens just as frequently in a comedy or romance where the stakes aren’t life and death, but a comic downward spiral.

Think of Tootsie, and Bill Murray having a meltdown about no longer being able to answer his own phone because he has to protect Dustin Hoffman’s alternate identity as a woman.

In fact, any lie that the main character has told in the first half of a story will come back to haunt them, big time, in Act II:2.

In the second half of a story, as we’ve said, there are bigger attacks on the Hero/ine by the Opposing Forces. But there are also often scenes that go deeper into the psychology and motivation of the Villain, or Forces of Antagonism.

– In The Hunger Games, Act II, Part 2, there are plenty of monstrous acts by most of the child Tributes, but thematically the storytellers are particularly good about showing how it’s the adults of Panem that are turning and have turned the children into monsters—as when we see the stomach-turning sadism of the Game Master, Seneca Crane, in creating the fire to drive Katniss back into the path of Cato’s gang of Tributes, and the fact that the people in charge of the games have created genetically engineered animals that are pure killing machines: the poisonous Tracker Jackers and the “Muttations”—that pack of rabid dogs.

These are all examples of what I like to think of as The Nature of the Beast: these horrific glimpses of the true nature of the Villain can happen anywhere, but you often see them in Act II, Part 2. Another great example is Lecter’s escape in Sequence 6 of Silence of the Lambs, when for the first time we actually see him kill and understand fully what a monster he is. Now, Lecter is Clarice’s MENTOR in that story—but he’s also representative of the evil in the world, and once he’s out in the wild, he’s not her teacher but another criminal she’ll have to bring down.

And there’s another element working in these scenes from The Hunger Games that you can consider working in your own Act II:2—your THEME. Of course, Gale has already stated a theme outright: “If we didn’t watch, they wouldn’t have a Game.” But what else? What are these scenes of sadism and torture saying in The Hunger Games? That mindless TV breeds monsters? Beware the power of sociopathic game show hosts? (I wish our own country had heeded that particular warning….) That any society that doesn’t make the welfare of its children its top priority is no civilization at all?

What are the lessons you want your story to impart, and how can you make these lessons come alive through action and conflict in Act II:2?

Now, back to the subject of OPPOSING FORCES: We also often see secondary opponents become allies—think of how much we love seeing surly and kind of scary Captain Quint finally thaw and bond with Brody and Hooper.
Or the opposite: it’s one of the most chilling or heartbreaking moments for a protagonist and for the reader/audience to learn of a close ally’s (or mentor’s) betrayal—as in The Fugitive, Marathon Man, Fellowship of the Ring, and, well, a ton of other mysteries and thrillers.

TICKING CLOCK
As I’ve said, you can start a ticking clock anywhere in your story, and you don’t need a ticking clock. But Act II:2 can be a good place to set a clock becaue it naturally amps up the suspense and pressure-cooker atmosphere.

The second act climax is another place that you tend to see a Ticking Clock—as in Alien, when Ripley sets the ship to blow up in ten minutes— and then in an excruciating Act III she has to both evade the alien and get to the shuttle with that literal clock ticking.

THE HERO/INE IS WRONG
One of our greatest pleasures in the experience of a story is to see a character change, or heal. And one of the best ways to show this playing out is to have your character be wrong in some way about how they are living their life.

We’ve discussed this already, but it’s so important I’m going to say it again. Part of the emotional turmoil of Act II, Part 2, is the clash between what the protagonist thinks they want – and what they actually need. And their actions so far in the story have been based on what they think they want.

(HINT: this spectacular failure is often the Sequence 5 Climax).

Storytellers will often Involve the reader or audience in this inner struggle by letting the reader figure it out before the character does. Sometimes this is pretty blatant, as in a million romantic comedies. How often are we sitting there thinking, “You idiot! Can’t you see you really love X, not Y?”

But we, the reader/audience, get a huge emotional catharsis from seeing a hero/ine going at something the wrong way and then finally getting it right.

So the key here is making the reader/audience want something DIFFERENT for your protagonist than the protagonist wants for themselves.

– In Harry Potter and the Sorcerer’s Stone, Act II, Part 2, Harry becomes fixated on the Mirror of Erised, in which he can see his dead parents alive. Well, we’ve all seen those zombie movies and we know he can’t bring his parents back. We don’t want him to! What we want for Harry is for him to recognize that he is surrounded by a loving family, his Found Family or Chosen Family. When we recognize the danger of the path the hero/ine is going down, we get invested in the outcome.

In Act II:2 you will probably want to reveal more about about your main character’s GHOST or WOUND— your character is wrong about the way that they’re living because of this wound. Or if you’re saving that reveal for Act III, then at least set that up with hints!


Do I have to include all of these elements in my Act II, Part 2?

Absolutely not!! I’m listing elements you tend to see happening in the third quarter of stories, to give you a range of choices of what you might include that will work for your story.

I also want to say again that this is the section of a book or script that’s the easiest to compress. Sometimes it doesn’t take many scenes at all to create a believable downward spiral, so don’t feel like you have to add filler to make Act II:2 longer. It should be only as long as it needs to be.

And here’s another, hopefully simple way to look at Act II, Part 2. The dynamic of this third quarter is often about creating a vortex of unbearable tension that will make everything in the protagonist’s world shatter apart. And then the protagonist will have to pick up the pieces and put them together in a new way, that after one Final Battle will bring them to the life they’ve always wanted to lead.

We can do that, right? Of course we can!