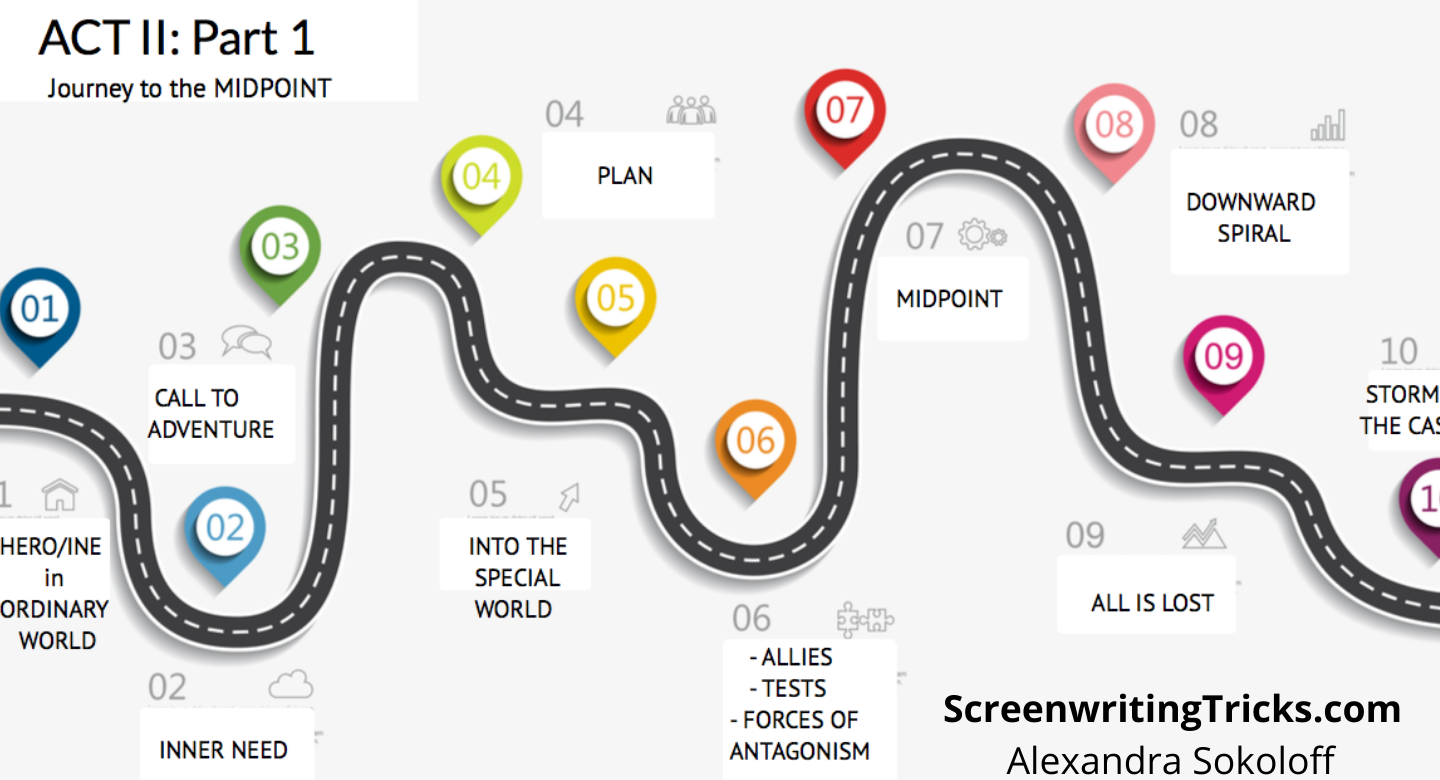 It’s halfway through the month— but for the vast majority of Nanowrimo writers I would be shocked if you were actually halfway through your book (as opposed to halfway through 50K words!) But it’s still a good reason to talk about one of the most important elements of any book, film, TV show, or play.

All of the first half of the second act of a story is leading up to the MIDPOINT (around page 60 or one hour into a movie or script, around page 200 in a 400-page book).

The Midpoint is also often called the MOMENT OF COMMITMENT or the POINT OF NO RETURN or NO TURNING BACK: the hero/ine commits irrevocably to the action.

The Midpoint is one of the most important scenes or sequences in any book or film: a major shift in the dynamics of the story. Something huge will be revealed; something goes disastrously wrong; someone close to the hero/ine dies, intensifying their commitment (what I call the “Now it’s Personal” scene… imagine Clint Eastwood or Bruce Willis growling the line). Often the whole emotional dynamic between characters changes with what Hollywood calls “Sex at Sixty” (that’s at 60 pages, not 60 years!).

The Midpoint is also called the MOMENT OF COMMITMENT or the POINT OF NO RETURN or NO TURNING BACK: the hero/ine commits irrevocably to the action.

And I strongly encourage authors to pay as much attention to your Midpoint as filmmakers do to theirs.

The Midpoint can often be a huge defeat, which requires a recalculation and NEW PLAN of attack or a CHANGE IN PLAN. It’s a game-changer, and it locks the hero/ine even more inevitably into the story.

Sometimes a TICKING CLOCK is introduced at the Midpoint. A clock is a great way to speed up the action and increase the urgency of your story.

And just to further drive its importance home, the Midpoint will often be one of the most memorable visual SETPIECES of the story, where the filmmakers really show off their expertise with a special effects sequence (as in How to Train Your Dragon and the first Harry Potter), or a big action scene (Jaws), or in breathtaking psychological cat-and-mouse dialogue between unforgettable characters (in Silence of the Lambs). It might be a sex scene or a comedy scene, or both in a romantic comedy. Whatever the Midpoint is, it is most likely going to be specific to the promise of the genre.

A good way to go about this is to look at your story as being divided into two distinct halves.

First, I want you to think about this. The dynamic of the Midpoint has been around since the beginning of theater—that is, for thousands of years. Many if not most plays have one intermission about halfway through the play. And we’ve already discussed this fact about intermissions: the playwright has to climax that first half with a scene so powerful, and a question so intriguing, that the audience will actually come back into the theater after knocking a few drinks or even meeting an attractive stranger in the lobby, right?

So imagine that there is going to be an intermission halfway through your book. What is the cliffhanger that’s going to bring your readers back to the story?

And second: I’ll repeat something I said last video, because I really want this to sink in. It is very, very often true that in Act II, Part 1, THE HERO/INE IS WINNING, then something happens at the MIDPOINT that changes everything, and things go quickly downhill from there, as suddenly in Act II, Part 2 the hero/ine starts to lose, and lose big.

So while the first half of your book will be energetic and forward-moving, the second half more often looks like a disastrous spiral down into chaos and darkness. It’s a difference of day and night, yang and yin. At some point everything will grind to – or crash to – a halt (THE BLACK MOMENT or ALL IS LOST).

There are exceptions, and we’ll talk about that.

But do you see how just that pattern gives you a roadmap to your long and terrifying second act?

I want to lock this concept in for you. The best way to do it is take at least three of the movies on your Master List, identify the Midpoint of each, and then really look at everything that the storytellers are doing to create that sense of the whole game changing.

It’s really worth taking a day or two to do this! And then we’ll talk more about Midpoints in the next blog.