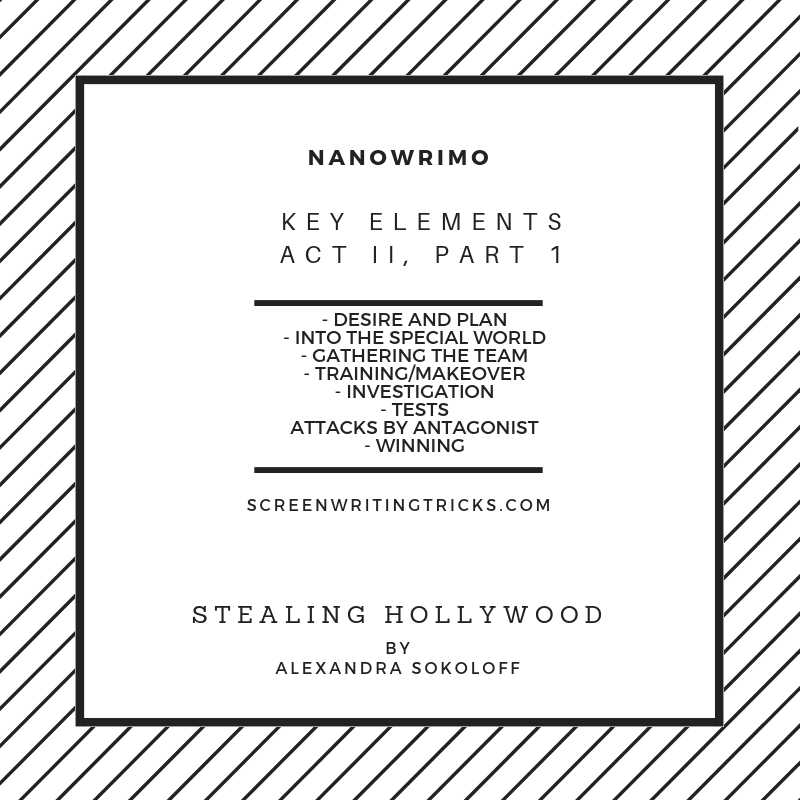 The first half of Act Two, which we will call Act II, Part 1 (30-60 minutes in a film, pages 100-200 in a book), is the most variable of the four Acts. Yes, for reasons I go into in my workshops and workbooks, the Three-Act Structure of filmmaking actually has four acts.

I can give you very specific story elements, even give them to you in a relative order, for every other part of a story, but Act II:1 can be maddening. That’s because what happens in Act II:1 is totally dependent on what KIND of story you’re telling. Is it a mystery, a fairy tale, a reluctant witness story, a mistaken identity story, a mythic journey, an epic, a forbidden love story, a Chosen One story, a magical day story, several of the above—or something else entirely?

Each one of those story TYPES has its own particular structure and story elements besides the general Story Structure Elements we’ve been talking about, and Act II:1 is where you most often see those specific story elements come into play.

But first, let’s talk about the story elements that you will usually find in Act II: Part 1, no matter what genre or story pattern you’re working with.

As we discussed here, the beginning of the second act of a book or film (which occurs 30 minutes or 30 script pages into a film, 100 or so pages into a 400-page book) — can often be summed up as INTO THE SPECIAL WORLD or CROSSING THE THRESHOLD. This is often the Act I CLIMAX.

We’ve met the hero/ine in their ORDINARY WORLD, and we know something’s missing for them, even if they’re not quite sure what, themselves. They’ve received a CALL TO ADVENTURE, and may have resisted it. But now it’s time for them to leave their comfort zone and go off into the SPECIAL WORLD to go after their heart’s desire.

This step might come in the first act, or once in a while somewhat later in the second act, but it’s generally the end or beginning of a sequence: landing in Alaska in The Proposal; flying down to Cartagena in Romancing the Stone; flying to Rio in Notorious; landing in wintry New Ulm in New in Town. As you can see from those examples, it’s often the beginning of an actual, physical journey, but the Special World can be much closer to home than that. In Meet the Parentsit’s the in-laws’ house; in While You Were Sleepingit’s the warm, noisy, rambling Callaghan house; in Four Weddings and a Funeralit’s a wedding (really, a whole season of weddings!)

If this has not already happened in Act One, the very early in the second act, the Hero/ine must formulate the PLAN. To review: we know the hero/ine’s GOAL or OUTER DESIRE by now (or if we don’t, we need to hear it, specifically). And now we need to know how the hero/ine intends to go about getting that goal. It needs to be spelled out in no uncertain terms. “Dorothy’s PLAN is to journey to the Emerald City to ask the mysterious Wizard of Oz to send her home to Kansas.” “Margaret and Andrew’s PLAN is to pretend they’re married and learn everything they can about each other during the weekend with Andrew’s family so they can pass the INS marriage test on Monday.” “Anna’s PLAN is to pay Declan to get her across Ireland to Dublin in time for her to propose to her boyfriend on Leap Day.”

Notice in the above examples that when I spell out the PLAN, I am also summing up the CENTRAL ACTION of each story: journey to Oz, pretend to be married, get across Ireland. This is so key to storytelling I wish I could somehow physically implant it in the brain of everyone who reads this post. The main STORY ACTION can always be stated as a question, and you should!

Writers so often have no idea what the Central Action/Question of their story is, or the Plan, and it’s the lack of these three things that is almost always where a story falls flat.

As we’ve already discussed, it’s human nature to expend the least amount of energy to get what we want. So the hero/ine’s Plan will change, constantly — as s/he first takes the absolute minimal steps to achieve her or his goal, and that minimal effort inevitably fails.

So then, often reluctantly, the hero/ine has to CHANGE THE PLAN and work harder.

Also throughout the second act, the ANTAGONIST has their own DESIRE and PLAN, which is in direct conflict or competition with the hero/ine’s goal. We may actually see the forces of evil plotting their plots (John Grisham does this brilliantly in The Firm), or we may only see the effect of the antagonist’s plot in the continual thwarting of the hero/ine’s plans. Both techniques are effective.

This continual opposition of the protagonist’s and antagonist’s plans is the main underlying structure of the second act.

(I’m giving that its own, bold line to make sure it sinks in.)

Act II:1 is also where you really need to deliver on THE PROMISE OF THE PREMISE. That is, if you’re writing a fantasy, you need to give us scenes that give us the experience of wonder and magic. If you’re writing a comedy, you better be making us laugh. If you’re writing any kind of romance, here’s where we want to see and feel the hero and heroine falling in love, even if from the outside it looks more like the two of them are trying to kill each other. Think of the EXPERIENCE you want your reader or audience to have, and make sure you’re creating that experience; it’s one of your primary jobs as a writer.

The hero/ine’s ALLIES or TEAM will be introduced in the second act, if they haven’t already been introduced in Act I. One of the great pleasures of Act II, Part 1 is experiencing the BONDING between the hero/ine and the allies, the team, the mentor or the love interest — or all of the above.

In fact, there is often an entire sequence you could call ASSEMBLING THE TEAM which comes early in the second act. The hero/ine has a task and needs a group of specialists to get it done. Action movies, spy movies and caper movies very often have this step and it often lasts a whole sequence. Think of Armageddon, The Sting, Mission Impossible (the great TV series), The Dirty Dozen, Star Wars. But you also see the team being assembled in fantasies like The Wizard of Ozand Harry Potter and the Sorcerer’s Stoneand Lord of the Rings. One of the delights of a sequence like this is that you see a bunch of highly skilled pros in top form — or alternately, a bunch of unlikely amateurs, losers that you root for because they’re so perfectly pathetic.

There is also often a TRAINING SEQUENCE in the first half of the second act. In a mentor movie, this is a pretty obligatory sequence. Think of The Hunger Games, the first Harry Potter,The Matrix, Karate Kid, and that priceless Meeting the Mentor/Training sequence that introduces Yoda inThe Empire Strikes Back.

There’s often a SERIES OF TESTS designed by the mentor (look at An Officer and a Gentlemanand Silence of the Lambs). It could be the antagonist who is putting the heroine through tests (there’s a great sequence of this in While You Were Sleeping). And when there is no mentor, it may be life itself that seems to be designing the tests and challenges (well, and doesn’t life do exactly that?). Look at how Fate slyly intervenes in Groundhog Day, and in a more subtle way, in French Kiss.

In a love story or romantic comedy, the Training Sequence is often a Shopping Sequence or a Workout Sequence or a Makeover Sequence, or a combination of all of the above. The heroine, with the help of a mentor or ally, undergoes a transformation through acquiring the most important of tools: the right clothes and shoes and hairstyle. It’s worked since Cinderella, whose personal shopper/fairy godmother considerately made house calls. There are practically infinite examples: Miss Congeniality, Clueless, Maid to Order, My Fair Lady, New in Town, The Princess Diaries— we love this scene. Use it!

I’d also like to point out that if you happen to have both an Assembling the Team and a Training sequence in your second act, that can take you all the way up to that all-important MIDPOINT CLIMAX. A whole fourth of your story right there! Awesome! You’re halfway through already!

And that’s enough to think about for one post. We’ll discuss more, important Act II:1 story elements next post.